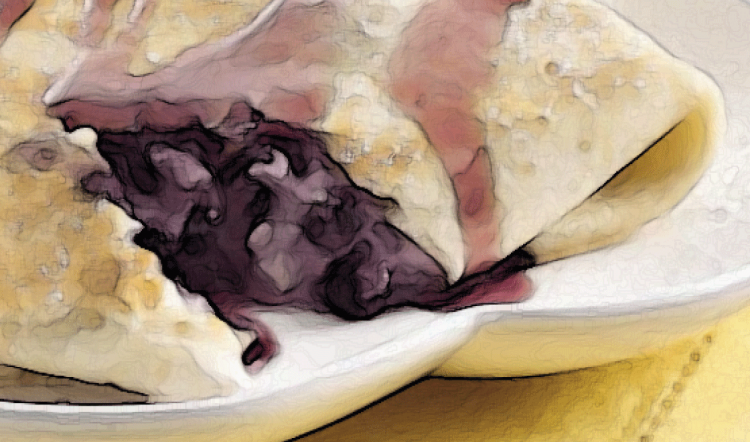 I’ve been cross-pollinating genres since I was back in college. Sometimes, a professor in one of my lit classes would be going over something I already knew well (like Shakespeare) and, as attendance was mandatory, I’d write some poetry, doodle mindlessly, or smash up a handful of words as what-ifs. The latter would be something akin to an elevator pitch/high concept draft, but I certainly didn’t know that at the time. For me, it was just a little vignette to remind me of this (good, bad, awful, wonderful) idea in case I wanted to do something with it later.

Fast forward to this past weekend. It’s super cold outside and we’ve generally been eating pretty well and decide we should fix some blueberry muffins. I spotted this package of mix we got at the groceries prepping for the holidays. A vestige of the eat whatever holiday spirit. We start preparing them and I ponder a dangerous thought aloud: Can you deep fry them? The internet assured me we could. The internet lied. The batter turned to a pale beige flotsam in the deep fryer. My force of will did not keep them together. They were a failure. Tiny brown bits of disgustingly greasy blueberry flavored blobs. They were crunchy. They smiled nice. They were sent to the garbage heap.

Later on, I decide to fix some of those not quite gourmet frozen burritos that are in the freezer. No one else eats them. I eat them as a cheat meal about once a week. Since I was stymied by the failed blueberry experiment, I decide these must be fried (rather than the healthier, less tasty microwave option) since I’m already this far down this road. I turn the fryer on, the scene of the crime, and I am greeted by the smell of blueberries. It smells like a donut shop in the kitchen. I wonder if this is a good idea and wonder how bad this can be.

It was kinda bad. The tortilla definitely picked up a faint hint of blueberry. In case you’re curious, blueberries do not compliment the savory beef and beans and cheese found within a burrito all too well. I refused to be daunted and ate it. (Okay, most of it. I couldn’t really get into the outer sweetness all that much.) After finishing the burrito (okay, there were two, but they were kinda small), I was full of beans, cheese, beef, and self-loathing. I felt a bit nauseous and wished I had just cut my losses and started fresh.

Learn the lessons found in the Blueberry Burritos.