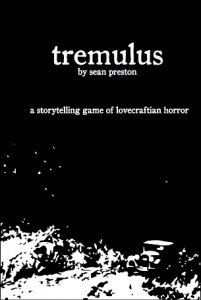 “Sean Preston wrote a game that reflects the horror play style I’ve always had to shoehorn into existing systems. tremulus takes you from zero to full immersion in mere minutes, and its narrative unfolds like a story penned by Lovecraft himself.”
-Ron Blessing, Co-host of RoleplayDNA and Smiling Jack’s Bar & Grill (and the much missed The Game’s the Thingâ¦let’s bring this back).

What Playbooks Are Found in tremulus?
There are eleven classic archetypes: The Alienist, The Antiquarian, The Author, The Devout, The Detective, The Dilettante, The Doctor, The Heir, The Journalist, The Professor, and The Salesman.
More archetypes are found in the themed sets of playbooks and playsets available separately.

Over 250 pages of horrific goodness.

Be sure to also add the FREE classic playbook package to your cart for printer-friendly characters!

Be the first to review “tremulus (Hardcover)” Cancel reply