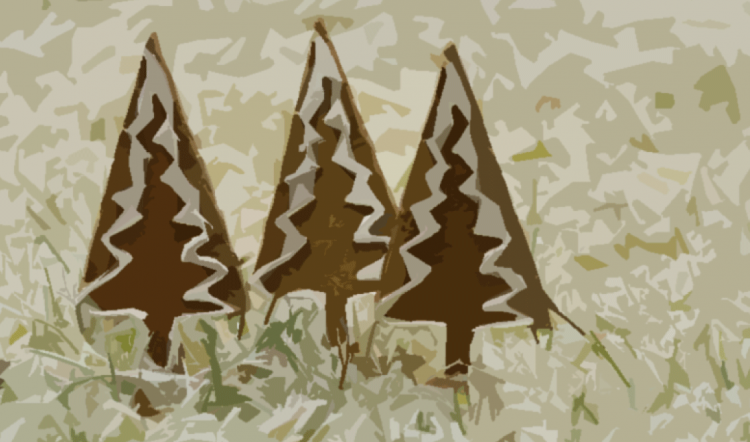 Some days you get longish rambles, essays, and the like. Others, you get what appears to be random rambles. Everything intertwines and forms a whole eventually, even if apparently unapparent from a close view. The Nazca Lines can only be truly appreciated from an aerial view, one supposedly impossible at the time of its creation. Befuddlement and mystery is all around us all the time. Speaking of memorable places, today we’re going to talk about the rule of three and how you can apply it when creating places ahead of time or on the fly for your fictions.

See? Hang in there long enough and, on some days, you get practical stuff.

The rule of three is used in structures, slogans, story structure, clues, and comedy. This, that, and the other is used to paint a picture.

A quick way to apply it to a place is as follows: consider (1) what it as known for, (2) what is unusual about it, and (3) what is its history.  Examples following.

The Pratchett House has long been known for (1) its apple trees that (2) produce two harvests a season. (3)It fell into disrepair after it was suddenly abandoned. These three items can be used to form a mystery triangle that can be explored in the story. Why is the land so fertile? Why was it abandoned? Who stands to inherit the land?

Equinox 9 is a way station on the outer edge of the space lanes. (1) It is clean and quiet. (3) It is considered a safe haven amongst the Seven and hosts regular diplomatic events. (2) Equinox 9 was once a self-maintained facility using a quantum computing system that gained self-awareness twenty-seven years ago. This presents a host of weirdness. Why hasn’t the company attempted to reclaim its facility or has it? How does the E9 view itself and organics? Why do alien races feel it safe to interact with humans there? Did any species nudge E9’s development?

Now, the third and final example shall be fantasy and dispense without the precise 1, 2 and 3.  Sort it out. You’ll see the bones within.

Vanguard Manor is the home of Lady McCloud of House Hawkberry. She inherited it after her husband passed last fall when his infidelities came to light. Her land adjoins the Kingdoms of Rathford to the North and Alesbury to the South. The McClouds control the pass. Whomever controls the pass controls great power. What happened to her husband? Was the infidelity a plot to wrest control from the McClouds? How firmly do the McClouds hold the land?

Typically, I use this rule of three when creating the bones of a place. This trinity can easily encapsulate a place and when layered together with proper villains and characters create a milieu with enough detail to have personality whilst providing enough creative space for players and GMs to personalize to suit themselves and their groups.