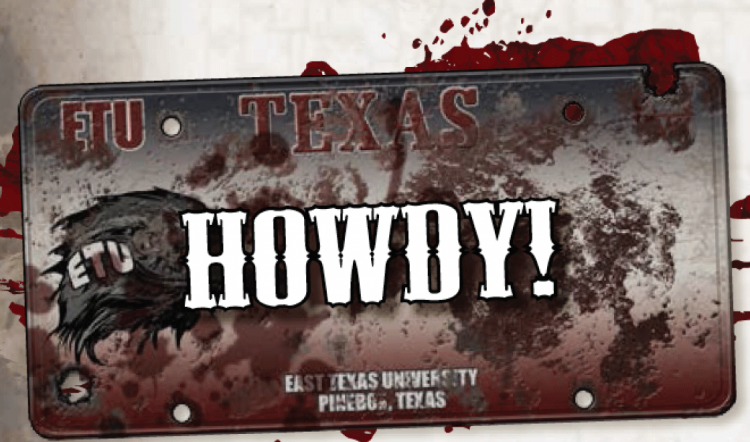 
Editor’s Preface: I reached out to Ed Wetterman to congratulate him and the crew on ETU on their recent successes and asked him to write “6 Reasons to Play” about it. Enjoy. -rsp

East Texas University is a modern horror game for the Savage Worlds system.  In it, characters go from innocent freshmen to world saving and graduating seniors.  It takes place in the dark Piney woods of East Texas in the fictional town of Pinebox and contains arcane cults, rituals, evil spirits, demons, and annoying roommates.  The setting, by Pinnacle Entertainment and 12 to Midnight, was written by Preston Dubose and Ed Wetterman, and has been nominated for an ENnie award and has won a Judge’s Choice award.

1. Realistic setting, just stretched thin.  The town of Pinebox and East Texas University were created to be good representations of life in East Texas.  Small town politics, football, making the grade, dating, growing up, and partying are common place, while adding the extra dimension of hauntings, evil rising, cults and cabals, and cryptocreatures to make for an exciting and fun college experience.  There is even a school fight song, sororities and fraternities, extracurricular activities, and a school fight song.

3.  The College Experience.  Setting rules for ETU include such things as Semester Allowance (limiting on hand money as most college kids have to survive on limited resources), and  Used Car Glitches (you get in to crank the jeep as the chupacabra growls and moves closer, but as usual, it is Hard to Crank).  The heroes not only have to fight evil and save the world, but they have to pass their exams.    By passing exams, the heroes gain special results that can help them through the next semester, but too much studying can lead to burnout.  Extracurricular Activities may help the student financially or socially, but may affect their academics.

4.  Ritual Magic.  The ETU setting provides a new system for performing Rituals and magic.  Rituals are harder to prepare and cast and may have more lasting effects.  Each ritual requires certain components (see random Ritual Component Generator) that may provide gaming adventures in just acquiring them.  Perhaps the heroes need 20 cc of Morphine and must steal it from the local hospital, or the wedding ring of a murdered bride.  Of course some rituals are bad and should not be attempted and could lead to Black Magic Corruption, and of course there is always the chance for Ritual Failure that could be anything from affecting a random target to summoning a demon (oops).  There is even a High Strangeness table to help create the mood and ambiance of a horror tale.

5.  Exciting Adventure Generator, Plot Point Campaign, and Savage Tales.  The Adventure Generator follows a simple set up for adventures with many exciting parts:  Who, What, Why, Where, and Complications.  Other generators include a Party Generator (because this is college and any excuse to party is a good one), and Research Adventures as the heroes often seek to find answers to the mysteries they confront or to unlock arcane rituals.  The Plot Point adventure is found in the companion book, Degrees of Horror.  There are 12 Plot Point adventures that combine to take the study group from their freshman year through graduation with many twists and turns leading to the climax of the campaign with the Convergence.   The Tales, which are adventures that the Dean (Game Master) can include at any time and they cover many types of adventures from hauntings, to cryptohorror, from bizarre, to challenging.  These 20+ Tales include the follow up adventures to Last Rites of the Black Guard-the very first adventure by 12 to Midnight and many other dark tales of horror.

6. Heroic, Gritty, Humorous, and Challenging Horror Gaming.  There are many ways to play ETU and it easily conforms to the type of game the Game Master and her players want to have.  First, ETU is heroic horror.  Good should defeat evil, though often at great peril and cost.  It can be truly gritty and terrifying with hauntings, demonic activity, cults and cabals, but if humor is more your style, it easily accomplishes this as well with one-sheet adventures (found on the Pinnacle Website) such as Redneckromancer (also ENnie Nominated this year).  Fans of the game have taken it even further creating Jello Monsters and Beelzabubba.  As the information on the back of Degrees of Horror reads, “Your boyfriend dumped you.  You’ve got exams first thing in the morning.  And the world’s going to end at midnight unless you stop it.  Looks like another all-nighter with the study group.”  Using the Fast, Furious, and Fun rules of Savage Worlds, the heroes of East Texas University must study, party, and save the world.  Can you survive four years of college?  Enroll at your own risk.