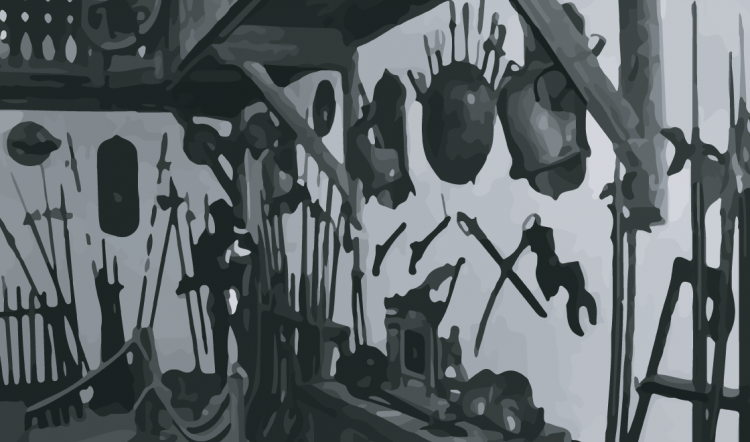 Those Who Would Hunt Monsters

We recently discussed how Karthador, while not a setting dedicated to horror, has plenty of horror elements for the GM to draw out. Today we’d like to take that a step further and discuss the heroes of such adventures. After all, in a world as diverse as Karthador, not every swashbuckling hero is going to tackle monster-hunting the same way.

Monster hunters from Myratas or Porothon rely on their technology to carry the day. They are armed with the best ray blasters, armor, and vehicles they can get their hands on, and always carry light globes to spare. If they know what they’re up against, they may even have specialized equipment: flame guns to use against ice monsters, energy jammers to use against mad scientists, or explosives to get rid of troublesome artifacts.

Of course all their gear can’t help them when faced with enemies who can bypass their armor or invade their minds. If the monster lurks in a “dead zone” where technology doesn’t work, they are likewise stuck up a creek without an energy crystal.

Heroes from Arcona or Ferazonn hunt monsters the same way they would a natural creature from their homelands. While they’re armed with spears, chuckers, and other weapons, they don’t rely on these things. Instead, their confidence is in their patience, cunning, and tracking abilities. Stealth is likewise important. They know that their quarry is faster, stronger, and possibly even smarter than they are; if they are to take it down, they must rely on the element of surprise.

Nevertheless, there are things in the shadows that can’t be surprised, or can’t be tracked by normal means. These hunters may experience true horror when they realized that they’ve actually been the prey all along.

Monster hunters from Sparasool or Ursicor approach the hunt like honorable soldiers. They work together as a disciplined unit, giving and taking orders, operating as a single entity. While they’re not opposed to using blasters or chuckers, they’re more comfortable with swords and spears. When faced with a human villain such as a mad psionicist, they try to negotiate and appeal to reason; they have honor, and want an honorable battle, not a meaningless slaughter.

Unfortunately for these hunters, soldiers aren’t necessarily trained to track enemies such as what they’ll be facing. And even when they find the monster, the hunters’ chain of command might not be able to adapt fast enough to deal with it.

Monster hunters from Doongarda and Rathiveen are hardened mutant-fighters. Unlike their western counterparts, they’ve dealt with war-mutant infestations their entire lives and know what it takes to wipe one out. They’re willing to throw everything they have at the enemy, with no fear of overkill. Explosives? Traps? Enormous guns that can kill from afar without even seeing the target? These are all valid answers to the question “How do we kill it?” For these hunters, this isn’t about honor or sport. This is survival.

They take the same approach to non-mutant threats. It doesn’t often work as well, since human villains understand what’s coming and know how to get out of the way. But those who don’t aren’t likely to see trial or even be captured. When found, they face the same overwhelming destructive force that the mutants do, and probably won’t walk away from it.

Monster hunters from Tharran are masters of research and arcane knowledge. They can find clues where others see only chaotic aftermath. If they have time for library research, they have countless resources at their disposal—especially the Great Library of Shelukun, which catalogs every psionic power and mutant breed known to man.

Tharran investigators aren’t typically very effective when it comes to actually destroying the horrific threat. While they can describe a mutant’s weak spot, or lecture on the top five ways to neutralize a crystal-powered murder machine, their knowledge is theoretical and academic. Some can hold their own in a duel, but few monsters would agree to engage in one.

These are all broad stereotypes, of course. But they can serve as general guidelines for players who want to create monster-hunting characters, or GMs who need a team of NPCs to blaze a trail to the monster… then die horribly, leaving the heroes to pick up where they left off.