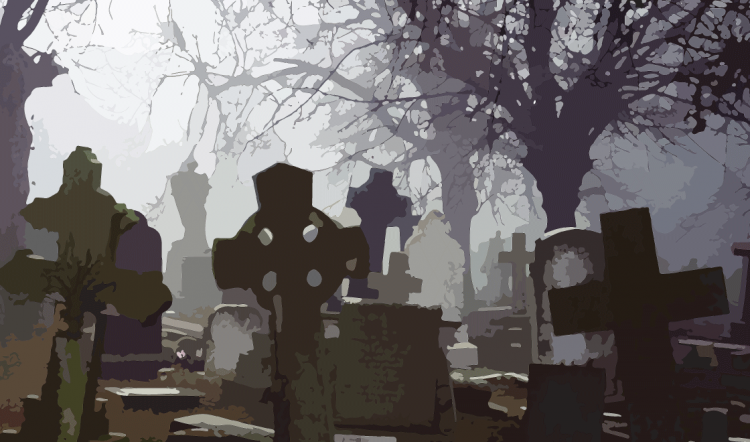 Horror gaming styles run the gamut, from mind-shattering eldritch terrors to classic haunted house mysteries to surviving a zombie apocalypse. These can be presented seriously with gruesome ramifications for failure, such as Night of the Living Dead or The Thing, or played for comic effect, such as Shaun of the Dead or Garth Marenghi’s Darkplace.

However you run your game, it’s important to evoke an overall aesthetic of horror. Terrifying the players – or at least creating an atmosphere of unnerving dread – not only enhances your game, it gets your players reacting to whatever nefarious evil you throw at them.

Horror games should create an atmosphere conducive to fearful restlessness. The GM should try for total immersion by dimming the lights, maybe lighting a few candles and playing creepy music. You want to see flickering shadows on darkened walls and create an ambiance akin to sitting around a campfire. All good ghost stories are told around a campfire.

Keep player characters isolated: a lonely log cabin in the woods, a tumbledown hotel in a ghost town, a deserted starship in the interstellar void. They’re always staying at a place where the phone lines are down, cellphone service is in a dead zone, or the bridge is washed out. Deprived of a link to the outside world, they are alone with the terrifying villain you create.

Instead of isolation, just confine them: they’re locked in an asylum, chained to a torture machine, or bound and gagged in a trunk. Anything restricting freedom of movement or proximity to familiar civilization creates a sense of pervading alienation and helplessness. Without control, they’re at their captor’s mercy.

You know how in every slasher movie the hero always happens to stumble upon the corpses of people he knew? Whether it’s the hero’s closest buddy, Old Man Johnson from next door, or the snooty sorority girl, someone’s body is going to be found. It doesn’t stop with just one body, does it? Presenting multiple victims ratchets up the tension and makes the hero realize something deadly is preying on people. If he doesn’t watch his step, he could be next.

Knowledge Man Was Not Meant to Know

Uncovering mysteries can be part of a horror game, especially when the hero needs to know secret information about a supernatural or mortal threat. They obtain this information by combing the newspaper archives or library, or hear an old geezer impart a strange tale, or recall a memory about why the house is haunted or the origins of a masked killer or exactly why the night sky flickers strangely. Sometimes learning this knowledge comes at a heavy price the heroes aren’t willing to pay.

One of our primal fears is fear of the unknown. Supernatural creatures such as ghosts, vampires, zombies and other phantasms occupy our nightmares for a reason. These unnatural denizens lurk on the periphery of reality, lusting for our destruction from the shadows. Yet fear of the unknown doesn’t have to be about monsters. It might be something as benign as a strange noise in the middle of the night, or a disembodied whisper in a darkened room. Having the player characters investigate things that go bump in the night is a good way to introduce your group to horror-themed gaming.

A little girl in a Victorian dress walks through a deserted building. A sinister clown stares at your house during the night. A cannibalistic nun or child possessed by true evil. What at first appears normal should be jarring, out of place and disconcerting. Symbols of comfort or familiarity become corrupted. The places and people we take for granted suddenly appear disconcerting and unsavory during this transformation. The little girl should not be in the deserted building. Why is she there and is she even real?

A murky, weird menace and touch of the macabre go a long way to adding flourishes to your horror game. Organ music drifting down the halls, human eyeballs in ashtrays, decapitated talking heads on spikes and severed heads in soup tureens. Giving your game a bit of campy creepiness works. Like having them investigate a fun house at a carnival, one populated by undead clowns hungry for humans.

The horrors should keep the heroes up at night or at least give them nightmares. For added effect, role-play the nightmares without telling the players. Place them in a doomed scenario with the threat chasing them. When the creature or murderer corners them and attacks, the heroes suddenly jolt awake. Was it a dream? Or a dream within a dream?

Don’t mollycoddle the players in a horror game. Instead, hit them with the unexpected. A child’s laughter echoing through a burned-out ruin will cause the spine-tingling terror and give the heroes pause. The sound of footfalls outside their door vanishes when they investigate. Have them lose their footing and fall into a pit filled with dead, decaying bodies. For added effect, the bodies slowly move and undead hands grasp the hero’s legs, pulling them under.

Keep players on their toes by elevating the tension. A monster pursuing them in an old cemetery could provide fodder for tension if their flashlights go out. While stumbling blindly in the darkness, one of them could twist their ankle. While prone on the ground, the hero hears the hideous rasping of an inhuman beast growing closer. How they pull themselves out of this will be up to them.

Remember, pacing is key. Slowing the action to build drama and fear should be done in the beginning, but as the villain reveals himself, the final battle should increase the tension. The heroes can be placed in doomed situations where all is lost, but they must be able extract themselves to safety – or die trying.