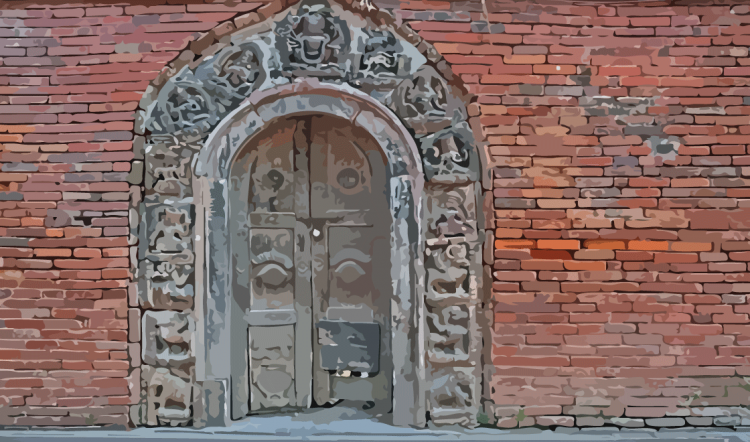 Lurker at the Whispering Gate

My first exposure to horror came from the devil.

The Jersey Devil, to be precise.

Growing up in southern New Jersey, you’d inevitably hear about a legendary cryptid dubbed the Jersey Devil or the Leeds Devil.

The tales, usually told around the dying embers of campfires, differ to some degree yet offer the same jarring narrative. One stormy night in 1735, Mother Leeds, assisted by old women from the village, gave birth to her thirteenth child. Versions of the story claim she practiced dark sorcery, while others made her consort to the Devil himself. While in labor, Mother Leeds cursed her baby, bemoaning she was sick of children and wanted the child to be born a devil.

A normal human at birth, with a plump face and cherubic features, the baby lay swaddled and cooing to the adoration of those gathered. Suddenly, a horrific transformation occurred, much to the shock of the woman and Mother Leeds.

Soft baby flesh morphed into fur as the infant grew taller than a man. The baby’s face changed into an elongated horse’s head, and its chubby legs grew hairy and hooved. A pair of leathery wings sprouted from the creature’s back and a serpentine tail from its hindquarters. The thing reared up, emitted a blood-curdling scream and, depending on which version of the tale you hear, either attacked everyone in the room or bolted up the chimney and out into the night.

Years passed, and sightings of the monster – called the Jersey Devil – increased in an area of New Jersey called the Pine Barrens. A vast region in southern New Jersey encompassing over 1 million acres, the Pine Barrens has an otherworldly feel. The wilderness of pines, oaks and cedars was once the site of a thriving bog iron industry in the late 18th and early 19th centuries and now contains remnants of ghost towns and colonial settlements, overgrown with vegetation and largely forgotten.

Into this foreboding and unsettling place came the Jersey Devil. Sightings occurred over the years yet paltry evidence revealed little of the creature’s existence. The Jersey Devil became the Garden State’s Bigfoot or Loch Ness Monster, an entity consigned to folklore and campfire tales.

In 1982 I heard a camp counselor recall in gory detail the Jersey Devil’s birth and its sinister presence stalking the Pinelands. The camp counselors decided to have a “Devil hunt” with us kids. Here I was, jittery and scared after hearing these tales, traipsing around the woods at night with a flashlight, searching for a monster, the source of my fear.

The Pine Barrens has an eerie, unsettling atmosphere; towering pines and narrow sandy trails snaking by rust-colored cedar bogs. Out of the corner of your eye, a tree branch bends as some unknown animal scampers underfoot.

Was this for real or just an overactive imagination deceiving you?

Suddenly you catch a faint glimpse of something standing on hooved legs, and see the magnificent ebony colored bat wings unfolding. Two glowing red eyes form from the shadows as the creature takes flight, the outline of its horned, hideous head apparent in the sickly moonlight.

It didn’t matter if the Jersey Devil was real or not. What mattered was someone convinced my younger self it was real.

That’s the power of horror. It’s psychological manipulation, relying on nudging the audience towards their own fears.

Take Orson Welles’ 1938 radio broadcast of H.G. Wells’ War of the Worlds. Because the show was presented in the form of a serious news account of a supposed actual event, some people believed Martian invaders landed in New Jersey.

Horror gives the audience just enough so their imagination and paranoia take over. They become afraid of the things they can’t see: the Thing in the closet or under the bed, the Shadowy Form out of the corner of their eye, or the seemingly plausible urban legend.

Horror not only must suspend your disbelief, but it also must go for a visceral reaction. It’s the equivalent of frightening a child by jumping from a hiding place and shouting “Boo!”.

My horror quest led me to classic monster films. I enjoyed the campy cheesiness of early Hollywood fright flicks, notably Bella Lugosi as Count Dracula and Boris Karloff as Frankenstein’s monster. I saw Freddy Krueger and Jason Voorhees slaughter teenagers while peeking through my fingers and slept with the lights on just in case.

Stephen King and H.P. Lovecraft became regular additions to my personal library, and The X-Files, The Walking Dead, and American Horror Story are some of my favorite TV shows. Did I mention I own an Evil Dead collector’s edition lunchbox? Well, I just did.

Being a horror fan means you enjoy getting the bejesus scared out of you, and crave those rides down fog-shrouded back roads, or exploring the abandoned asylum or graveyard. You expect to feel fear, to hear the maniac’s chainsaw or see a spectral entity embrace you with a bone-chilling touch.

To think I owe it all to a mythological beast who even today stalks a dense conifer forest nearby, devouring unlucky travelers with its diabolic appetite.