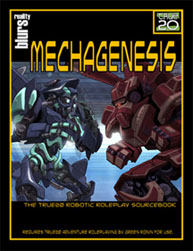 Mechagenesis: The True20 Book of Robotic Roleplay is set to hit your FLGS next week. Within the pages, you’ll find everything you need to build your very own transforming robot and defend the planet from the evil invading force of Legion!

The Earth has been invaded by the Legion, an army of extraterrestrial shape-changing robots bent on galactic domination. They are opposed by the Global Defense Corps, brave humans who sacrifice themselves each and every day to preserve humanity, but they are not alone. You are a member of the Alliance, a valiant cadre of exiled robots who once fought them and lost. Now, you must muster every resource at your disposal to rise up once again and drive out the invaders and end the scourge of Legion once and for all. The time of Mechagenesis is now!

Rules are included for making giant robots that can transform into cars, weapons, technological devices, animal shapes, and even buildings. It contains a simple system for designing futuristic weapons, vehicle combat (naturally!), and special powers based on the core True20 powers. It even has rules for combining multiple robots into a larger humanoid robot with even greater strength and power. The rules also allow for a player to run a robot or a human.